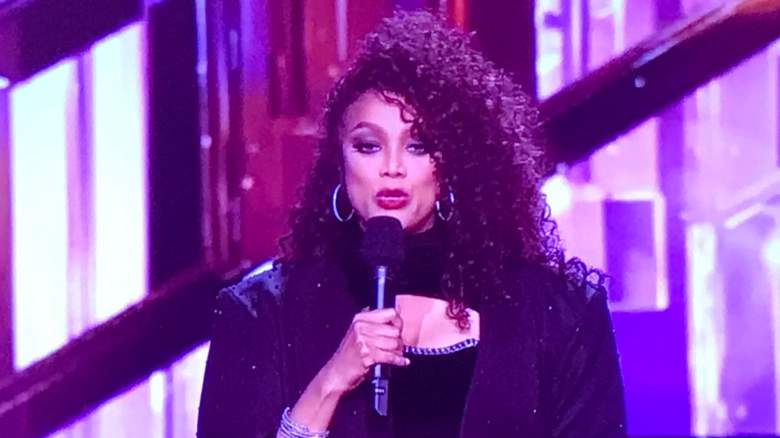 On the Monday, November 8 “Dancing With the Stars” episode, host Tyra Banks came out dressed like Janet Jackson circa Janet’s 1986 smash hit, five-times platinum album “Control” — and a lot of fans thought this was her best look in two seasons of hosting the show. Of course, there were also fans who thought she looked like “bargain bin Janet Jackson.”

Some Fans Thought She Was Janet Jackson For A Split Second

When Tyra entered the ballroom after the eliminated pros performed to “Nasty,” she strutted out with an enormous side ponytail and some big shoulders and fans thought it actually was Janet Jackson for a second.

“Wow Tyra as Janet! That outfit on Tyra is amazing!” wrote one fan.

Another added, “Tyra understand the assignment of Janet Night. I thought she was Janet for a second.”

“Can’t believe I thought Tyra was Janet for a split second,” wrote one fan with a crying emoji.

“WTH I thought that was the real Janet Jackson but it’s Tyra Banks instead,” wrote another.

“Don’t like Tyra as host but damn I’m loving her hair!!!” said one fan.

“Wow! Tyra looks so much like Janet!” wrote another fan.

A lot of fans also thought this was the absolute best outfit Tyra has ever worn on the show, with one writing, “Tyra Banks redeemed every weird look this season with this flawless Janet ensemble.” Another fan wrote wrote, “This is best Tyra has looked!,” and another wrote, “That is my FAVORITE Tyra outfit so far on the show.”

“Wow, I actually like Tyra’s outfit tonight,” wrote another viewer.

“THANK YOU FOR FINALLY PUTTING TYRA IN SOMETHING FLATTERING. WHY WAS IT SO DAMN HARD????” said one fan.

“For the first time this season Tyra is dressed like [fire emoji],” wrote one fan.

Of Course, There Were Still Some Haters Out There

You can’t please everyone and there were a few “Dancing With the Stars” fans who thought Tyra looked ridiculous, with one writing, “Of course Tyra comes out dressed as a bargain bin Janet Jackson.”

And several fans thought she should stop name-dropping how she and Janet are friends in real life, like how she mentioned she used to go to Janet’s concerts and then they would go out to eat together.

“It took Tyra about 10 seconds to ruin Janet Jackson night with awkward moves and an awful interview. #DWTS stop her PLEASE,” wrote another viewer.

Another fan snarked, “No one cares about your personal relationship with Janet, Tyra,” and another added, “We get it Tyra, you’re friends with Janet.”

A third wrote, “Tyra won’t let Carrie Ann actually say anything because they’re ‘out of time’ but will spend 3 minutes talking about how she’s friends with Janet Jackson which literally nobody cares about.”

But one fan pointed out, “Tyra got Janet Jackson to make an appearance and watch live. She’s not going anywhere.”

“Dancing With the Stars” airs Mondays at 8 p.m. Eastern and Pacific times on ABC.

READ NEXT: DWTS Pro Starring In A New Dance Movie

Vicky Kaushal: I’ve got way more success than I had ever imagined – Exclusive! – Times of India

Anil Kapoor celebrates 20 years of ‘Nayak’: I had to do this film and believed in its message – Times of India

What George Russell’s move means for Mercedes, Lewis Hamilton and Formula One