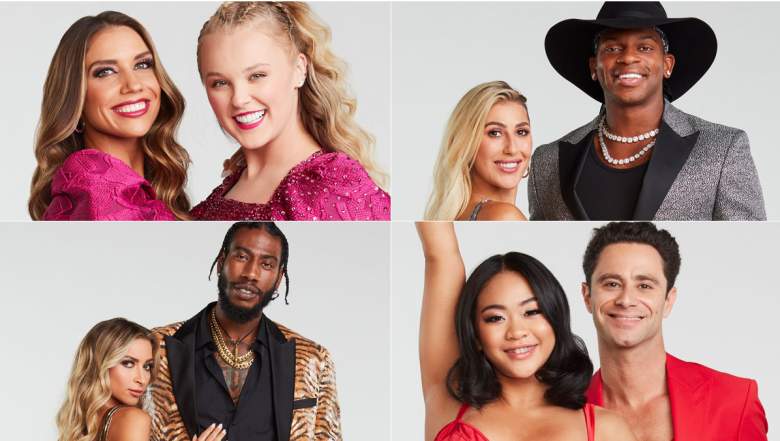 “Dancing With the Stars” sent its eighth and ninth celebrity and professional dancer pairs home in week 8 on November 8 during the double-elimination Janet Jackson theme night. Read on to find out which two couples were sent packing from the ballroom but be warned of spoilers.

The Two Couples Eliminated On November 8 Were…

The bottom three couples were Melora Hardin and Artem Chigvintsev, Olivia Jade and Val Chmerkovskiy, and Jimmie Allen and Emma Slater. The lowest vote-getters were immediately sent home and that couple was Olivia and Val, leaving the judges to decide between Melora and Jimmie.

The judges voted unanimously to save Melora and Artem, sending Jimmie and Emma home. It makes sense because Melora has been a very strong dancer, but Jimmie made such strides week in and week out. He came in with no dance experience and blossomed every week, so it is a shame to see him go.

When the judges made their decision, Carrie Ann Inaba was crying as she said, “This breaks my heart. You both have done really well. Jimmie, you are what this show is about in so many ways.”

Derek Hough added, “This is really difficult, it really, truly is.”

Bruno Tonioli said, “Let me say one thing — Jimmie, I loved watching you all the way through. You’ve grown so much, you’re so entertaining, but at this stage, I have to save Melora and Artem.”

Len Goodman also revealed that he would have voted to save Melora and Artem, so it was unanimous. But it was pretty shocking to see Melora and Artem in the bottom. Melora is going to have to rally her fans because she consistently gets high marks from the judges, so it must be the public’s vote that landed her in the bottom three.

The Couples’ Journeys On The Show

Prior to their elimination, Olivia and Val were in the bottom two once before, during “Grease” night. The judges were split on who to save between them and Mel C. and Gleb Savchenko, but Len Goodman’s vote was the deciding vote and he chose to save Olivia and Val. Their average score was a 33 out of 40 and their highest scored dance was their quickstep to “Fat Bottomed Girls” during Queen week, which received a 38 out of 40. Their lowest scored dance was their week one salsa to “Juice,” which received a 25 out of 40.

Prior to their elimination, Jimmie and Emma were never in the bottom two and steadily improved week over week. Their average score was a 31 out of 40 and their highest scored dances were their contemporary dance to “Say Something” during Horror Week and their Viennese waltz to “Somebody to Love” during Queen week, both of which received 38 out of 40. Their lowest scored dance was their week one tango to “The Way I Are” with a 22 out of 40.

Next week is the semifinals and it’s another double elimination, so be prepared for more brutal cuts, fans.

“Dancing With the Stars” airs Mondays at 8 p.m. Eastern and Pacific times on ABC.

READ NEXT: DWTS Pro Starring In A New Dance Movie

The success of “Succession” proves the virtue of hateful characters

Netflix’s Squid Game is estimated to be worth $900 million

Ranbir Kapoor and Alia Bhatt are not getting married this year -Exclusive! – Times of India

Is Tim McGraw on ‘Yellowstone’?

‘What is Squid Game?’: SNL enjoys dig at Republicans over Facebook hearing

The Business Benefits of Bitcoin