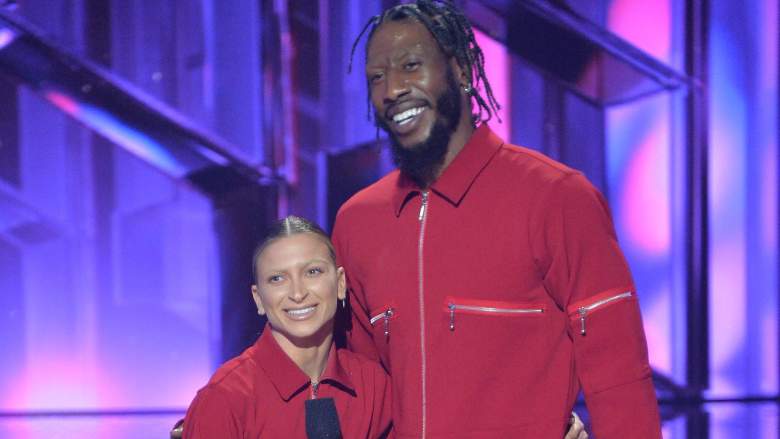 Daniella Karagach and Iman Shumpert on ‘Dancing With the Stars’

The recent contemporary dance between Daniella Karagach and Iman Shumpert is being hailed by some “Dancing With the Stars” fans as one of the best the show has ever seen. But as is often the case with success comes the haters and now there is a small section of “Dancing With the Stars” fans claiming Daniella did not do her own choreography. Here’s what you need to know and why the accusations are not true.

Shortly after Daniella and Iman received a perfect 40 out of 40 for their contemporary “Us”-themed dance to Luniz’s song “I Got 5 On It,” fans on Twitter started claiming that new pro dancer Ezra Sosa helped choreograph the dance and didn’t get credit for it. According to Reddit, the source of the rumor was Kristyn Burtt’s Patreon, which is described as “leaping into dance’s greatest stories.”

We do not know exactly what she told her subscribers, but one Reddit user wrote that Burtt “dropped the seed that Ezra choreographed the lifts” in the dance. After all of this started, Burtt’s most recent Patreon post is titled “What Happens On Patreon, Stays On Patreon,” so she may be unhappy with her subscribers sharing things she has told them through Patreon with social media at large.

But either way, whatever the exact information was led to rapidly-spreading rumors on social media and fans blasting Daniella for not giving Ezra credit.

“That’s not fair to Ezra he spent a lot of time working on this dance. By not giving him credit is so horrible,” said one fan.

Another added, “I feel as if it shouldn’t be difficult to acknowledge another dancer for assisting with such a gorgeous dance, especially when the lifts were an integral part of it & Ezra was the one who came up with them… this isn’t sitting right with me.”

“Daniella not giving Ezra credit for the lifts isn’t sitting right with me when this routine is getting lots of attention. She’s still amazing but Ezra deserves credit where it’s due. I have to give her the side eye here especially with her deleting comments mentioning Ezra,” wrote a third fan, though he eventually tweeted an apology for this tweet, writing in a follow-up, “Would like to apologize for this tweet last night was never my intention to hate on Daniella or bring her down. I was going off what I was hearing about the choreography.”

However, Ezra Sosa Himself Said That All He Did Was Help Test The Lifts Out

I’m not sure who the source is, but let’s clarify one thing before this gets out of hand, this is Daniella choreo and her lifts! She asked me to come in to try her lifts to see if they would work.

“I’m not sure who the source is, but let’s clarify one thing before this gets out of hand, this is Daniella choreo and her lifts! She asked me to come in to try her lifts to see if they would work,” wrote Ezra in both tweets.

In an Instagram comment, someone tagged him on Daniella’s post about the dance and wrote, “Great job on the choreography,” to which Ezra responded, “That was all Dani choreo!”

Fans on Reddit are saying that Daniella has been deleting Instagram comments that accuse her of not doing her own choreography, but most fans think she is perfectly within her right not to have to put up with those comments. They also commend Ezra for “nipping this in the bud” and say they are not surprised that it seems to be the Alan Bersten/Amanda Kloots fans who are really being ugly about all of this.

“He’s a good one for nipping this in the bud. Considering the kind of lifts they were, it makes complete sense that Dani had to have shown Iman how to do it with the help of another trained professional dancer. … It’s sad to know Dani did such a good job and the fandom sort of rained on her parade like this!” wrote one fan, adding, “It make sense that particular fandom is so salty with Dani. She’s killing it with a non ringer, making the height difference work to their advantage with her choreography meanwhile their fav can’t even crack a perfect score with one of the top ringers of this season even tho one of the judge is literally this stars friend irl. They have to cut someone down to make excuses for their fav.”

Some fans think female pros get unfairly blasted for things like this when all of the pros use other professional dancers to test out choreography all the time — one fan even said that Witney Carson and Lindsay Arnold were used all the time to test out choreography when they were in the troupe because they “talked about it on Afterbuzz TV at the time.”

However, in this case, it does not sound like Ezra was even a “ghost choreographer” — he has stated that Daniella choreographed the routine and he was brought in to help test out the lifts. Those lifts were so difficult that it makes sense that she would need someone who is a professional to try them safely before she had her non-professional partner attempt them so that no one got hurt.

Daniella has not directly addressed the accusations, instead choosing to simply praise Iman for his hard work, writing on Instagram, “I’m speechless. It’s one hell of a task to ask a celeb who’s never danced before to learn a contemporary and teach him all the moves… But for @imanshumpert to learn the dance, commit to the movement, listen to instruction, perform barefoot after all his body has been through in his career and perform the dance effortlessly and in character is a whole nother level. I’m so lucky to have you as a partner Shump. Thank you for inspiring me and making my job as your coach one that is always exciting and joyful. Every rehearsal with you is a laugh till we cry but get shit done kinda day. Couldn’t have asked for a better partner. I’m so so proud of you.”

“Dancing With the Stars” season 30 airs Mondays at 8 p.m. Eastern and Pacific times on ABC.

Emmy Awards 2021: All the winners on TV’s big night

From Turd Ferguson to the Moth: Norm Macdonald’s Most Memorable TV Moments

Neuroscience Is Inspiring Some Amazing Sci-Fi

How to Watch ‘Saturday Night Live’ Online for Free

‘Cobra Kai’ Creator on the Future of Miguel & Tory’s Relationship