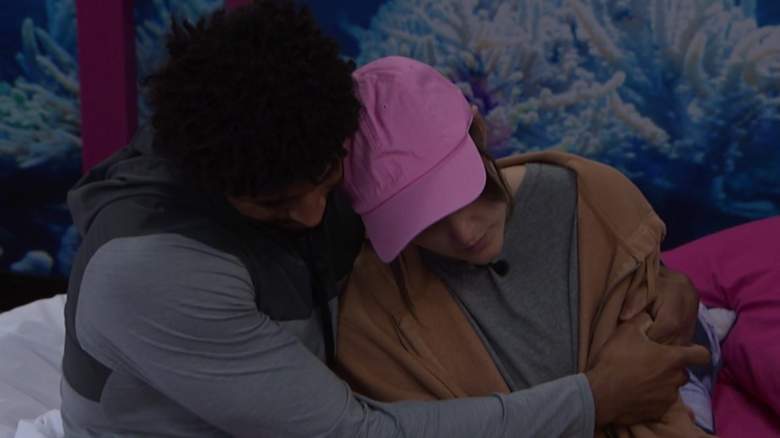 Kyland comforting Sarah Beth when they were both on the block.

On Thursday night, Sarah Beth was evicted from the “Big Brother” house by a vote of 5-1.

In her exit interview, she told Heavy what she thinks of Kyland’s secret alliance and revealed why she thinks the other houseguests should thank her.

In his goodbye message to Sarah Beth, Kyland revealed that he’s been working with a secret alliance since week one. Azah also said that Sarah Beth’s eviction was just part of “furthering a mission that’s close to her heart.” Based on these messages, Sarah Beth has begun to piece together The Cookout.

When Heavy asked Sarah Beth who she thinks Kyland is working with, she said, “Kyland mentioned that he’s in a secret alliance. Piecing that together with information that I got from Azah’s goodbye message, I’m pretty sure there’s an alliance in the house whose goal is to have season 23 have the first Black winner. Which I totally understand why that would be really important to Kyland and to Azah and I think it would also be really cool.”

Who does she think is in the secret alliance? “I’m guessing Azah and Kyland and I think Xavier are definitely in it,” Sarah Beth told Heavy. “Possibly maybe it’s bigger than that, maybe Tiffany or Big D or Chaddha (Hannah) but I’m not sure,” she added.

The week before Sarah Beth’s eviction, she was Head of Household. She decided to use her power to backdoor Derek X. Now that she knows she and DX were both outside of the majority alliance, does she regret that move?

“I do not regret backdooring Derek X. I still think that that was a good decision for my game. I knew when I made it that it meant I might go home in the next few weeks,” Sarah Beth told Heavy. She explained that she was never playing for just one or two weeks of safety at a time. She was playing to win.

“I’ve been playing as, ‘I need to do whatever I can to clear a path to the final two chair and ultimately a victory’. With the information that I had at the time, I could not see a way for me to actually make it to the final two chair and win if Derek X. was still in the game because he was such a strong competitor and had such strong bonds in the house,” Sarah Beth said.

By backdooring DX, Sarah Beth took out perhaps the biggest threat to The Cookout. “Honestly I think people in the house should thank me. I think I did them a favor,” she said.

In Derek X.’s eviction speech, he threw some shade at Sarah Beth by insinuating she was playing a “Nicole F. game.” He was referring to Nicole Franzel, who won “Big Brother 18.” Franzel is a controversial figure in the “Big Brother” fandom, so was Sarah Beth offended by the comparison?

“To be completely honest, I misheard him when he originally said that,” Sarah Beth told Heavy. She thought Derek X. said she was playing a “cold AF game,” which she found distressing. “It really hurt my feelings, I was very upset about it. I cried a lot,” she said.

Sarah Beth says that when she figured out what Derek X. actually said, she was relieved. “I mostly just felt relieved because I thought he said something much meaner than that initially,” she told Heavy.

Who Sarah Beth Thinks Will Win

“I think Xavier is in the best position in the house right now,” Sarah Beth told Heavy. “I think that he is in the secret alliance but he also has really strong connections with other people outside of that alliance. And I think that puts him in the absolute best position to make it to the final two chair and I think if he does that, then he’s set to win this game.”

Both Derek X. and Britini gave the exact same answer in their exit interviews. Tune in for a new episode of “Big Brother” on Sunday, September 5 at 8 p.m. Eastern.

‘Teen Mom’ Star Admits to Upsetting ‘Denial’ About Her Body