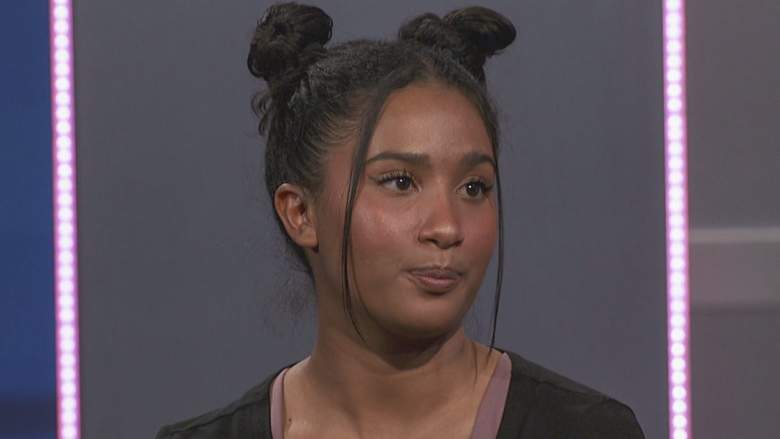 Hannah Chaddha became the seventh member of the “Big Brother” jury when she was evicted second as part of the second double eviction of season 23. She now joins Britini D’Angelo, Derek Xiao, Sarah Beth Steagall, Claire Rehfuss, Alyssa Lopez, and Tiffany Mitchell in the jury house.

In her exit interview, she talks to Heavy about whether she feels betrayed by the Cookout and why she knew she had to win during the double eviction to save herself.

Heavy: Did you feel going into the second eviction that your game life was on the line if you didn’t win HOH or POV?

But I knew that unless I won HOH or Veto, I was gonna be the target that week because I did not see Azah putting Big D on the block. I kind of figured that she wouldnt’ want to touch him, so I was gonna go on the block at some point, whether it be before Veto or after Veto. So it was up to me to win HOH or Veto to reposition myself for that eviction but also reposition myself within the house and take one of those guys out and because I didn’t do that I’m sitting here right now. I knew that my game was on the line, I knew that my minutes in that house were numbered unless I won. So I’m not shocked that I was the second person targeted.

Heavy:Were you surprised that you and Tiffany were the first two Cookout members targeted and taken out?

Hannah: No, I’m not really surprised that Tiffany and I were the first two members of the Cookout targeted. Tiffany came up with the master plan, she would’ve had a very, very compelling final two argument and that’s threatening to anyone, including myself. I was Tiffany’s closest ally within the Cookout and in the house, so it’s kind of logical that I went next. If my suspicions are correct and the guys are working together, they may see me as slightly more of a competitive threat than Azah.

Also, the way that the Cookout was set up, you had Ky, you had Xavier and you had two duos — you had Azah and Big D and then you had me and Tiff, and I certainly do believe that Tiff and I were the stronger and more competitive of the two duos, so yeah, I figured for weeks that when we got to [final] six, Tiffany would be the first and either myself or Azah would be next.

Hannah Does Not Feel Betrayed By the Cookout

Heavy: Who do you feel the most betrayed by in your eviction?

Hannah: I honestly don’t feel betrayed by anyone. I think Azah made a decision that she felt benefitted her the most. Maybe she did that in order to build more trust with Ky? But you really have to know your audience — Ky would not want to bring [Azah] to the end. The guys have something, the guys are all incentivized to keep each other in this game and that does not include you, Azah. So I don’t feel betrayed by her, I just feel like that wasn’t the most intelligent move to make.

But I figured this was coming. Like I said, unless I would’ve won that HOH or Veto, there was really no avoidng this outcome. Had I maybe had a couple days to campaign and change people’s minds, maybe I wouldn’t be sitting here, but everything happened so rapidly that there wasn’t much I could do.

Is This ‘When Hope Calls’ Synopsis Hinting About Henry Visiting Abigail?

Aryan Khan Drug case: Sameer Wankhede warns he has just filed the case, says he has ‘six months to probe’ – Times of India

How one Facebook worker unfriended the giant social network