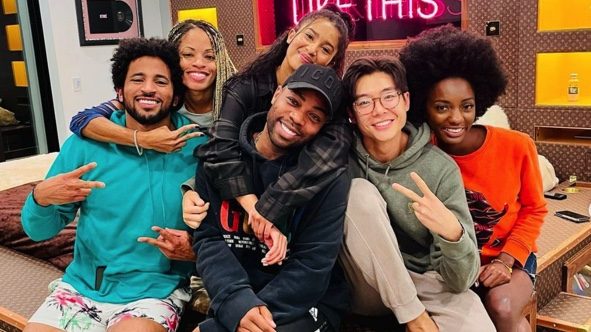 The cast of “Big Brother 23” has proven to still be incredibly tight-knit even with the season finale now a month behind us.

Christian shared a video on his Instagram story of him meeting up with Tiffany and Kyland at the airport. In the video, he pretends to be a “Big Brother” fan who can’t believe he has run into them. A video on Britini’s Instagram story shows Christian doing a handstand on the arm of a couch at what appears to be a rental home or apartment.

Who From the Cast Was Missing?

The only “Big Brother 23” alums missing from the reunion were Derek Frazier, Brandon “Frenchie” French, Travis Long, and Whitney Williams. Of the missing houseguests, Derek F. is perhaps the most surprising, since he was in the “Big Brother” house until the final two.

But even though Derek F. was missing, he shared an Instagram story of him opening a gift from Xavier while on FaceTime with him. Xavier had presented everyone else at the reunion with gifts as well. It’s unclear if Whitney Williams, who recently tweeted that another “Big Brother 23” alum discouraged her from having any more public disagreements with other cast members, was invited to the reunion or not.

A pinned tweet on Whitney’s Twitter profile reads, “I have zero hate toward any of my #bb23 cast. A few have had their moments that may have either bothered me or I don’t agree with, but just like a family we discuss our issues and we get over it. I still very much love the majority of these people.”

Whitney criticized Derek Fraziers’ treatment of women on “Big Brother 23” and called him “entitled” in an appearance on “The Winner’s Circle.” She also stated in a tweet that she has no hard feelings towards any of the “Big Brother 23” cast “Other than Brent, he can f*** right off.”

As for Frenchie, it seems like he’s a little too busy with farm life to take a vacation at the moment. On October 28, he shared an Instagram photo of a new baby calf born at his farm. Travis lives in Hawaii, so a last-minute trip to Florida may have been difficult.

Xavier Got Gifts for Everyone

Since Xavier just won $750,000 for beating his “Big Brother 23” family, it’s a nice gesture that he presented everyone with gifts at the reunion. Tiffany posted a video on Instagram thanking Xavier for giving all of them Shinola watches.

In an Instagram story, Tiffany revealed that her watch has the word “mastermind” engraved on the inside and that Hannah Chaddha’s has the word “prodigy.”

Was Snooki Close With Deena Cortese Before ‘Jersey Shore’ Started?

Kate Beckinsale, 47, has NEVER had cosmetic surgery and hopes she ends up looking like her mother

Tom Hanks Nearly Destroyed Connor Ratliff’s Life. So He Made a Podcast About It

Who are the past winners of The Great British Bake Off and where are they now?