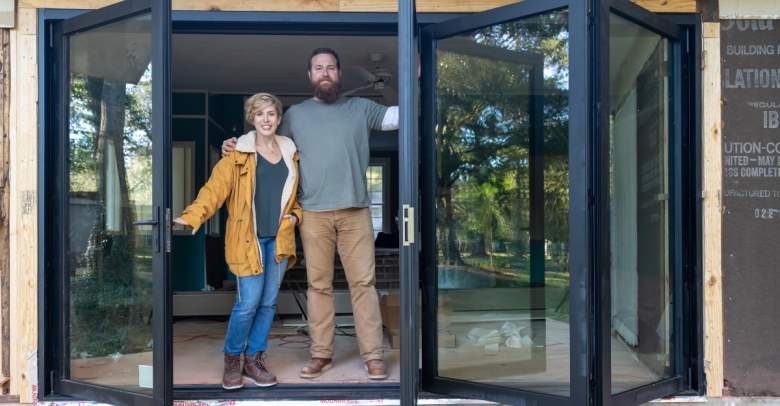 Ben and Erin Napier are saying goodbye to their first home as a married couple, but not before one last celebration. To commemorate their 13th wedding anniversary, Erin revealed on Instagram that her husband took her “home to the old apartment one last time.”

The graphic designer posted a video of their romantic night in. “In 2008, when we got married we did our first renovation: a very drafty 100 year old loft in downtown Laurel,” Erin wrote in the caption. “When we got home from our honeymoon 13 years ago, we put up our first Christmas tree of our own in the corner in the living room. We started our first company in that loft, and we’ve kept it as my studio all these years.”

But now that loft is becoming “a new home for someone we love dearly,” she explained.

For their walk down memory lane, the “Home Town” host wrote, “We had our favorite Chinese carryout from our newlywed years atop the ginkgo leaves from the tree next to our loft. The same tree’s leaves showered us as we ran to the car after our reception. We drank our favorite soda in the glasses we bought on our honeymoon at Fishs Eddy. He made a playlist of songs from our beginning, from our wedding reception, to now. Our box of wedding mementos and my shoes were there.”

The star revealed she cried, thankful that “God gave us each other.” She added, “Tonight Ben told me, ‘He knew you needed someone who understood your tender heart.’ Yes. To be completely understood (for better or for worse) and found valuable anyway: that’s love.”

The Napiers Celebrated Their 13th Anniversary

The “Home Town Takeover” hosts celebrated 13 years of marriage on November 22, 2021. To mark the occasion on Instagram, Erin shared photos from their wedding and honeymoon.

“13 years ago we became family then went to NYC for Thanksgiving,” she wrote. “Every year on our anniversary week, I’m so very thankful for you and the life we’ve made together.”

While she thanked her husband for loving her, the woodworker shared a similar sentiment. He called her “the best one of all time,” on his Instagram. “I love you more than ever.”

Throughout those years of marriage, the couple has welcomed daughters Helen and Mae and built an HGTV franchise centered on revitalizing small towns.

While fans should not expect another season of “Home Town Takeover,” the couple is partnering with some of HGTV’s biggest stars for their new series “Home Town Kickstart Presented by People” to have an impact on six new small towns.

The Napiers will support Nate Berkus and Jeremiah Brent of “The Nate and Jeremiah Home Project,” Ty Pennington of “Rock the Block,” Jasmine Roth of “Help! I Wrecked My House” and Alison Victoria of “Windy City Rehab” as they take a three-pronged approach to their revitalization efforts. According to a press release, in each town they will “refresh the home of a local hero, give a small business a beautiful upgrade and reinvigorate a public space to enhance the residents’ quality of life and engender community pride.”

“We see the positive impact of this small town renaissance every day in Laurel,” Erin said in the announcement. “Ben and I can’t wait to share all we’ve learned with our fellow HGTV experts so they can help these communities achieve their goals.”

People magazine will provide further coverage of these towns and their residents.

‘The Problem With Jon Stewart’ Is Stuck in the Past

‘The Matrix Resurrections’ stuns with first trailer, ushering back to where it all started – Times of India

Siddharth Anand on working with Hrithik Roshan for ‘Fighter’: ‘He’s a complete hero’ – Times of India

‘Succession’ Season 3 Is a F**king Killer

Premier League: Manchester City Sweep Aside Everton to Close in on Chelsea