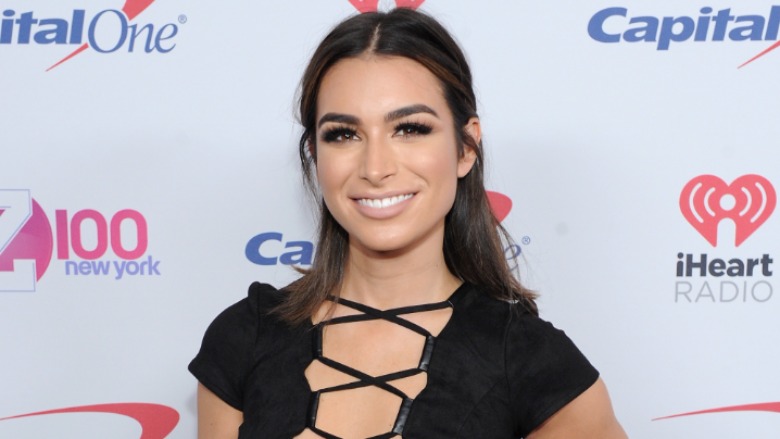 Ashley Iaconetti is 18 weeks pregnant, and she has shared a new photo of her growing baby bump.

The “Bachelor in Paradise” star and her husband, Jared Haibon, have been sharing their pregnancy journey on social media, often providing updates and photos for fans who are interested in seeing how things are going.

Over the past several weeks, Ashley has been suffering from severe sickness, which she has detailed on her Instagram Stories. In her 18-week bumpdate, Ashley shared that she has been feeling much better lately, and she has definitely gotten the vomiting under control.

“I threw up for the first time in a whole week just minutes after I took this photo this morning. That’s a big step forward in my pregnancy! The longest time I’ve gone between barfs! I feel like this week 18 has been a turning point for me (knock on wood), albeit I do take Zofran (a medication that prevents nausea and vomiting) about half the week. It’s been such a life changer since I started being able to take it after the first trimester,” Ashley captioned an Instagram photo of her bare bump.

Ashley Has Had a Rough 18 Weeks

As detailed in her most recent Instagram update, Ashley hasn’t been having the easiest time adjusting to pregnancy. While some things have gotten better, she seems to be experiencing quite a few of the bad side effects that moms-to-be experience.

“I’m certainly no where close to the glowing stereotype of a pregnant woman, but I never imagined myself being that either,” Ashley captioned her post, in part. “I wake up in wet sheets from night sweats daily… the constipation is gnarly…,” she continued.

“The acne has my self-confidence down (and no, it’s not my prenatal. I take one without biotin intentionally)…the congestion and post-nasal drip is disgusting and often nausea-inducing…I’m still pretty adverse to most liquids in hydrating amounts…but I’m so thankful my level of comfortability is improving and that the baby boy in my belly is doing well,” she added.

While Ashley couldn’t possibly know how her body would respond to being pregnant, she previously told Heavy that she planned on sharing just about everything with her fans. “You’re going to see the nitty gritty,” Ashley said.

Although Ashley has certainly received her fair share of haters comments on social media (some comments she has shared on her Instagram Stories over the past few weeks), the feedback on her posts is mostly positive. Many really appreciate that Ashley is being so real and so raw with her followers.

“Love your realness!!! It’s so refreshing. And glad to hear your morning sickness is starting to ease up. Once you start to feel him kicking & moving it makes it all worth it,” wrote one Instagram user in the comments section of Ashley’s recent baby bump pic.

“I freaking love your honesty and transparency! Thank you! You rock! Pregnancy is brutal for a lot of us. Your words help me not feel so alone,” added another.

“Thank you for shedding light on how rough pregnancy can be. As a momma who suffered with severe nausea for both kiddos through the 3rd trimester, I appreciate your candor. Pregnancy isn’t always beautiful. Sometimes it”s really [expletive] hard,” echoed a third.

READ NEXT: Ashley Iaconetti Is Pregnant & She Told Us Everything [Exclusive]

Julius Rosenberg was a Soviet spy. Ethel’s case is murkier

Where Tony Soprano really comes from

Tabletop RPG Workers Say Their Jobs Are No Fantasy