‘She Is Posing for Me’: What a Courtroom Sketch Artist Sees in Ghislaine Maxwell 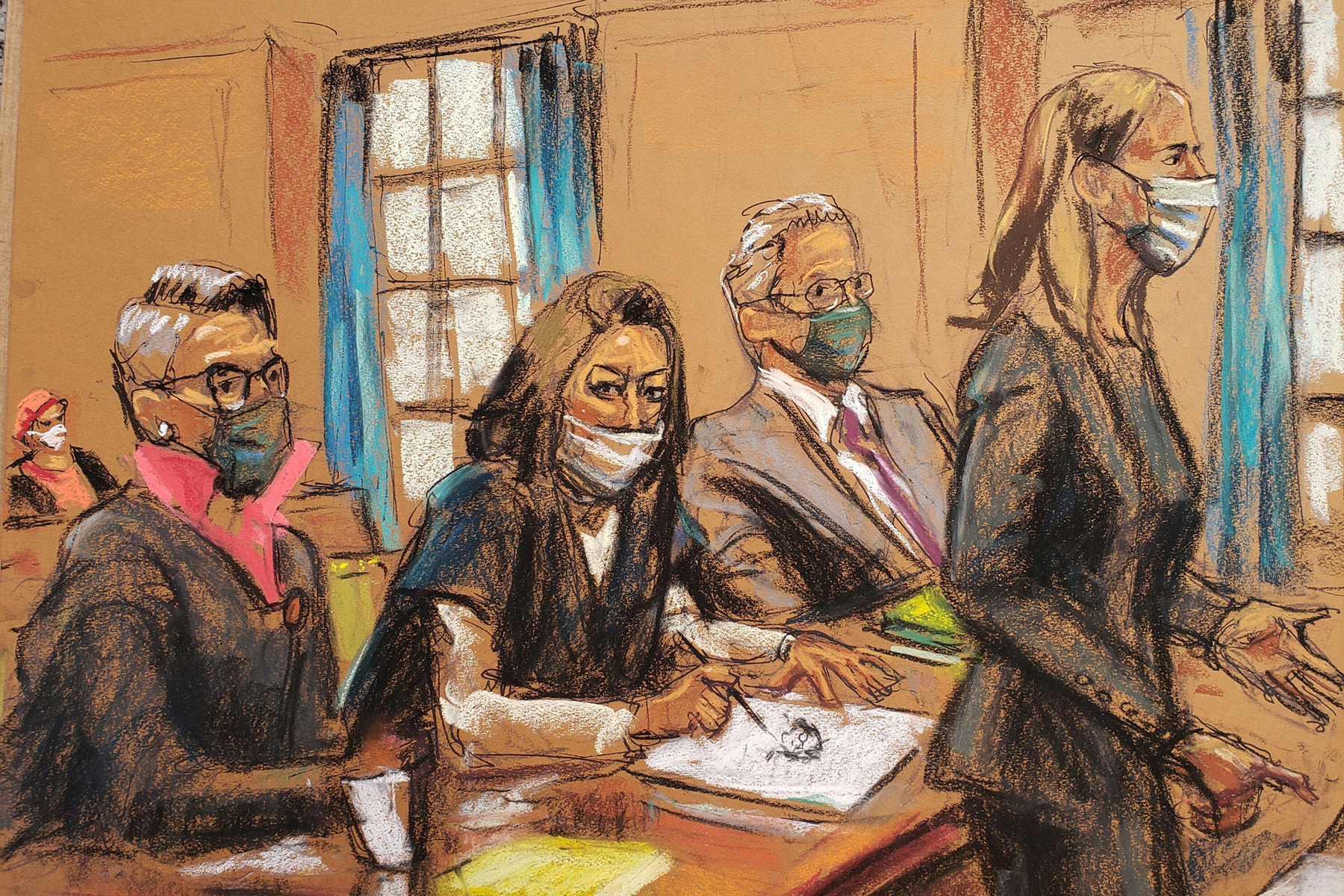 “Before we start I have a question for you,” Jane Rosenberg says when I call her up on a Sunday. “I’m doing the crossword — ‘Start of an article in journalist lingo, 4 letters, blank blank, D-E.’”

The courtroom sketch artist of nearly four decades is enjoying a rare moment of repose in her Manhattan apartment while covering the Ghislaine Maxwell trial. Every morning, she wakes up at 4 a.m. to get a seat at the Thurgood Marshall United States Courthouse, where the English media heiress is on federal trial for charges including the sex trafficking of minors. (Maxwell has pleaded not guilty.) Every evening, while she is covering a case, she has to sharpen her pencils with a razor, sign her work for the day, and put it all away before she has to wake up in the wee hours to do it all over again.

Rosenberg has forged a career plumbing the depths of human misery by drawing defendants in high-profile trials. She was there for the Harvey Weinstein case, the El Chapo trial, and the R. Kelly court proceedings. She was there for Steve Bannon’s arraignment, Woody Allen’s custody hearing, and John Gotti’s trial (during which Gotti gestured to his double chin, telling Rosenberg to make it look smaller in her sketch). She’s covered the Cosby case and the Boston marathon bomber trial (though she bemoans the fact that the courtroom was so full she could barely see the defendant, Dzhokhar Tsarnaev).

Now, Rosenberg is covering the trial of Maxwell, the socialite accused of aiding and abetting her former ex-boyfriend Jeffrey Epstein’s underage sex trafficking ring. Maxwell is accused of recruiting girls to provide sexual favors to Epstein, who died in prison in 2019. It’s Rosenberg’s job to cover trials for various news outlets by maintaining as neutral a stance as possible. “I do have an opinion each day. But I’m trying to capture the moment I’m going after, what I see visually,” she says. “I don’t see how my opinion [of a case] would play into it.”

Most recently, however, Rosenberg became part of the story when one of her sketches went viral on Twitter; an image of Maxwell sketching her during the proceedings. Though many on the internet were bemused by the image, interpreting it as a “power move” on Maxwell’s part, Rosenberg says this is not the first time a defendant has sketched her during a trial: very early on in her career, Eddie Murphy did (“he gave me his sketch on a Post-It. He was making fun of me, bobbing his head”), as did Rudy Giuliani’s former associate Lev Parnas during his recent trial (“that one was a little unsettling”).

So when Rosenberg realized Maxwell was sketching her, “it was kind of cute to me. It didn’t bother me at all,” she says. “I was just like, oh, she’s sketching me. I wasn’t gonna be thrown off my game.” She doesn’t think it’s necessarily a power move on Maxwell’s part — “I don’t know what’s in her mind” — but she does note that Maxwell is extraordinarily demonstrative with her legal team compared to other defendants she’s sketched. Maxwell was also permitted by the judge to briefly speak with her siblings during the proceedings, something that Rosenberg says she has rarely witnessed before.

“She does a lot of hugging and kissing of her lawyers in the courtroom. That’s quite unusual….I guess she needs affection. She’s isolated in her jail cell all the time. I don’t know,” she says. Rosenberg adds that Maxwell is also “quite animated compared to a lot of defendants.” “A lot sit like a lump in their chair and don’t do anything. So that’s helpful for me,” she says.

Maxwell has also attempted to initiate contact with Rosenberg, at one point turning around and pulling down her mask to say, “Long day, isn’t it?” Rosenberg responded that yes, it was. “Since then we’ve developed some kind of rapport which I do not want to lose,” as it helps her render her drawings, she says. “She’ll nod to me now. I’ll get eyebrow lifts and nods. It’s great for me. I need to keep that going. She sits around posing for me. It’s great.”

Rosenberg became a courtroom sketch artist full-time in the late 1970s. As a “starving artist” in New York City who’d just graduated fine arts school, she was looking to make money when she saw a courtroom artist give a lecture at the Society of Illustrators. She was first hired by NBC to work as a courtroom sketch artist during the trial of Craig Crimmins, the so-called “Met Murderer” who killed Metropolitan Opera violinist Helen Hagnes during an intermission in 1980. Since then, she has borne witness to the evolution of the criminal justice system and news media coverage, even as the introduction of televised trials in the 1990s threatened to put her out of work.

“It seems like the news media tends to have a lot of trends [in which trials they cover],” she says. “Now there tends to be a lot of #MeToo or sex abuse. There was a wave of financial cases with Bernie Madoff. There was a time period when there was a lot of ISIS and terrorism after 9/11. Trial after trial it was terrorists. Doesn’t seem like they cover that much anymore.” Though she admits to having had some trepidation about stepping foot in a courtroom after 9/11, for the most part she feels entirely safe in courthouses — even though she’s often sitting mere feet away from some of the most dangerous criminals on the planet. “I’m less comfortable taking my easel on the streets of the city these days,” she says. “I feel very afraid nowadays. There’s a lot of crime and random, angry people. I feel I have to stay alert outside.”

During the pandemic, Rosenberg was forced to draw defendants on Zoom; now that she is back in the courtroom, COVID-19 protocols still do pose difficulties, to some extent. With a mask, “you just get half a face. It’s not as interesting as seeing a whole likeness. I just have to work with the eyes,” she says. “Sometimes [Ghislanine] will keep her mask below her nose. It tends to slip down. But it’s more about capturing the body movements, the expressions.”

Despite having to remain neutral, at times Rosenberg’s resolve has been tested by the brutality on display in the courtroom. The Susan Smith case, for instance, in which Smith locked her two children in a car and watched the car roll into a river, drowning them, was difficult for her. “They screamed, ‘mommy, mommy’ as she walked away. I had a child the same age,” she recalls. “I do remember crying at that. It was horrific.” But for the most part, emotions don’t factor into her work, which must be produced rapidly and on a deadline. “Pastels don’t do well with tears falling on them,” she says. “I’m just there to draw. I don’t make judgments.”

JoAnna Cameron, star of The Secrets of Isis, dies aged 70

We Need to Talk About ‘Spider-Man: No Way Home’ Now

Never Have I Ever renewed for a third season by Netflix

Can the Great Green Wall save China from the climate crisis?

Fury grows at mandatory quarantine from France to UK