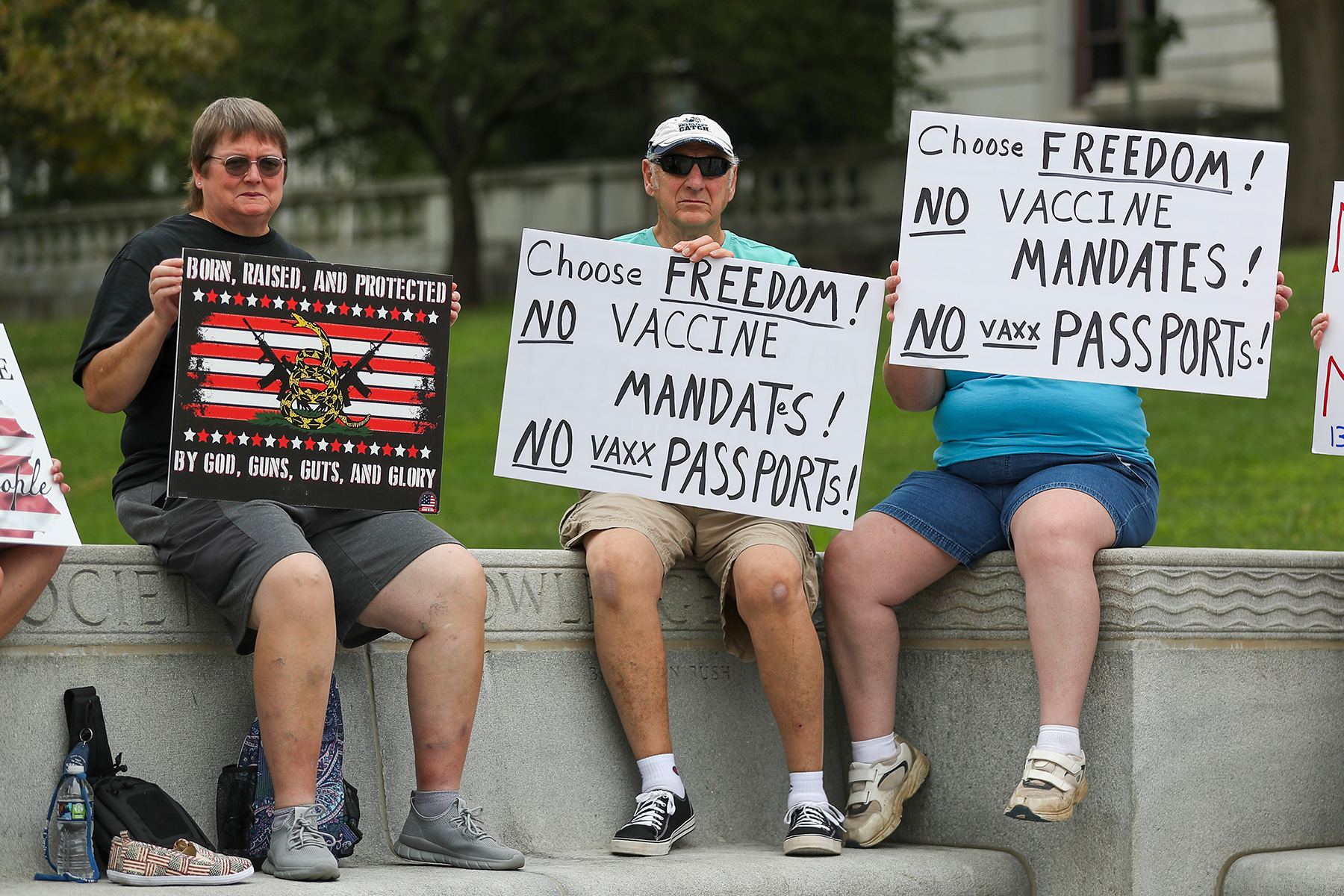 When President Biden announced last night that his administration would be instituting vaccine mandates for up to 100 million Americans, no one expected anti-vaxxers and far-right extremists to be particularly happy. Yet one would’ve thought they would’ve organized something a little better than this.

In response to Biden’s mandate, which requires that federal employees be vaccinated against Covid-19 or be subject to weekly testing, anti-vaxxers predictably became enraged, swapping calls for revolution and uprising and sharing template forms for how to request religious exemptions from their employers. (He also announced that workers at companies with more than 100 employees would be subject to vaccine requirements, though they will have the option of weekly testing, instead.)

One far-right influencer who appeared to have been particularly enraged by the mandate was Ron Watkins, the former administrator of the message board and bastion of far-right extremism 8chan (Watkins is also widely believed to be “Q,” the anonymous poster responsible for promoting the QAnon conspiracy theory; prior to being suspended from Twitter in January for promoting QAnon, Watkins had a large following on Twitter and was occasionally retweeted by former President Trump. He has since pivoted to spamming subscribers and ranting about UFOs.) Last night, he posted a video on the encrypted messaging app Telegram, where he has more than 420,000 subscribers, with the caption “Info coming soon. #TheGreatAmericanWalkout,” showing off posters with the slogan “No forced vaccinations.”

Earlier today, Watkins posted a flier for #TheGreatAmericanWalkout, encouraging Americans “willing to stand against forced vaccinations” to walk out of their jobs and schools in protest between September 11 and September 14. “God has given us inalienable rights and freedoms. With increasingly tyrannical mandates, they are trying to take your God given rights away from you. Now we STAND UP to tell them NO,” he wrote. Watkins also posted the contact information for a print shop in San Diego where people participating in the protest could print out banners and fliers. (Watkins did not immediately return a request for comment.)

Unfortunately, it doesn’t seem that many people have heeded the call to “STAND UP” against the tyranny of being encouraged to take a potentially life-saving vaccine. According to data provided to Rolling Stone by Darren Linvill, an associate professor at Clemson University and researcher into social media disinformation, the hashtag only has a little more than 500 tweets, most of which come from accounts with a few hundred followers, far fewer than one would expect for an organized social media campaign. The largest amplifier of the hashtag was an account with 10,000 followers, and even that tweet only garnered a few retweets. “End of the day on Friday is not when you want to start this kind of thing,” he says. The hashtags also has less than 100 posts on Instagram.

People on the internet have also started skewering the attempt to start a social movement, pointing out just how ineffectual a “walkout” organized largely on a weekend could be. “Yes, all of the students are gonna walk out of their schools on September 11 and 12….on a weekend,” one YouTuber said. Even those on the right have criticized the campaign. “I do not support a national walkout, Sept. 11-14. Whoever is ‘organizing’ this seems sus,” Stop the Steal organizer Ali Alexander wrote on Telegram, adding, “Everyone indiscriminately walking out, starting on a Saturday, and with that many people remote, makes NO SENSE.”

Additionally, when contacted by Rolling Stone, an employee at Green House Sign Design, the company Watkins promoted on Telegram, said he had received only two actual orders to print #GreatAmericanWalkout signs. Though he refused to disclose the name of the customer who had placed the original order, he said that he did not share the customers’ views about vaccine mandates. “That question shouldn’t be asked to me,” he said. “I’m just a printer trying to make money.”

Love Island SPOILER: Toby sets his sights BACK on Chloe

WandaVision spinoff starring Kathryn Hahn is in the works