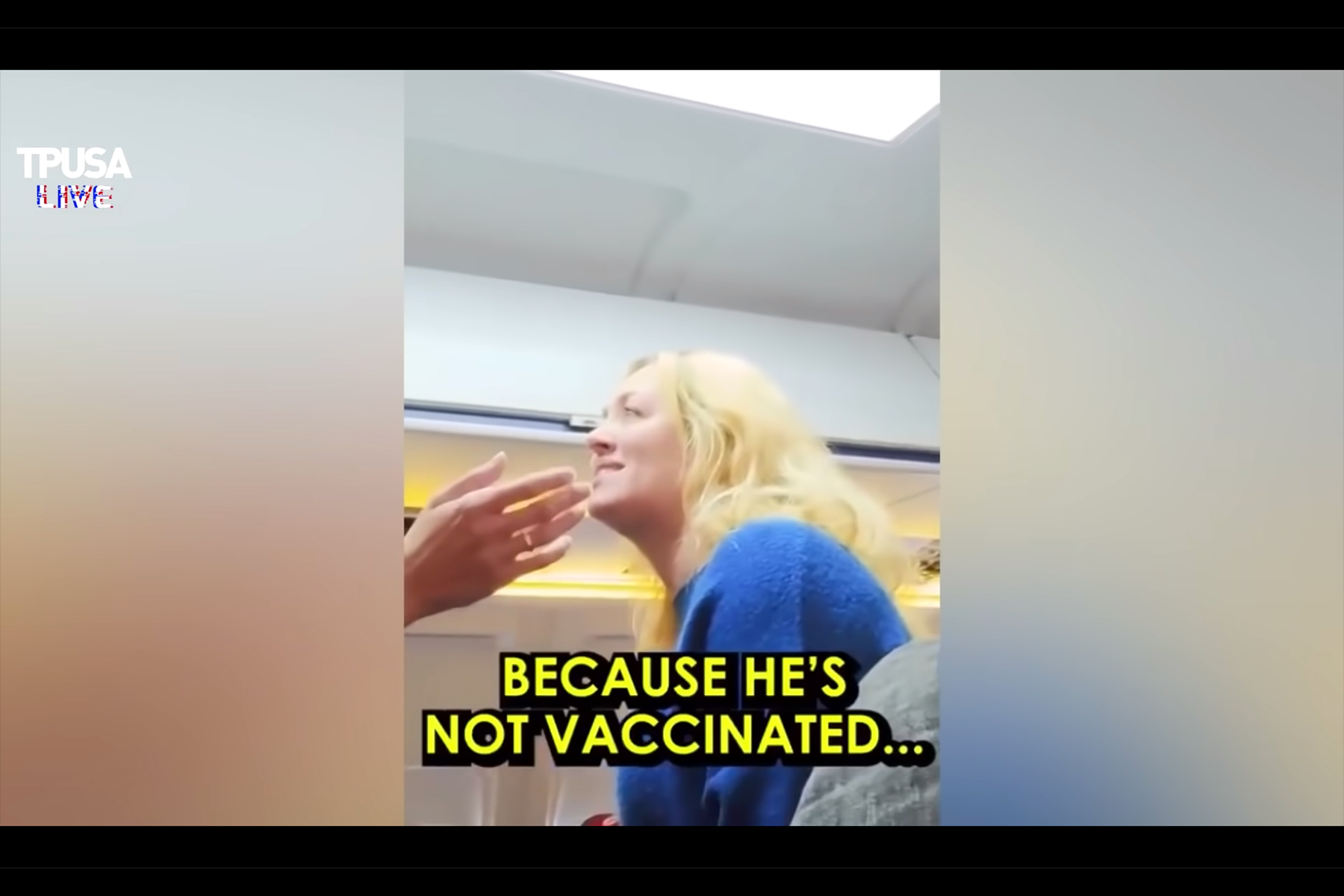 Six days ago, a TikTok creator named Anjelo Tavera posted a video of a blond woman in a blue sweater having a meltdown on what appears to be a commercial passenger jet. In the video, the woman speaks in stilted, almost mid-Atlantic tones as she delineates to an extremely patient flight attendant why she refuses to take her seat on the plane.

“I work hard. I paid for my seat. Which is clearly going to put my life in danger,” she intones in the video, which appears to be recorded from the vantage point of another passenger. As a baby cries in the background and music dramatically swells, the woman explains that she asked her seat-mate to provide his vaccination card, he did not, leading her to believe he wasn’t vaccinated. “I cannot be made to breathe his oxygen. That’s not fair!” she screams before the handsome, broad-shouldered captain emerges to deliver a rousing speech.

“Vaccinated or unvaccinated, we should respect each other,” he says, adding that he will not tolerate “discrimination” against the unvaccinated on his flight before rousting her from the airplane, to a round of applause from the other passengers.

The video appears to have been engineered in a lab to achieve mass virality, particularly for an audience inclined to side with the airline crew. It has everything: a dramatic soundtrack; a buzzy social issue (in this case, vaccination requirements on international flights); a high-strung white woman, or “Karen” in internet parlance, publicly berating harried airline employees, and a stoic, barrel-chested authority figure to serve as the voice of reason during chaotic times. And go viral it did, with Tavera’s video on TikTok racking up more than 34 million views; it has also been reposted and retweeted thousands of times on Twitter, as well as the YouTube channel for the conservative outlet Turning Point USA, where it has more than 150,000 views.

But if the video seemed like it was designed to go viral, that’s because it basically was. The clip appears to have been produced by content creator Prince Ea, aka Richard Williams, also responsible for such staged clickbait as “Racist Lady Gets Covid — What Happens Next Will Shock You,” “This Virus Spreads Faster than Covid” and “‘Woke’ bully shames comedian, instantly regrets it.” Williams, who has 5.6 million YouTube subscribers, also posted the video for “Covid Flight” on Nov. 1 on Facebook, where it got 23 million views. His post was captioned, “She must have been having a bad day,” but did not disclose that the video was staged in the post.

According to an IMDB page for “Covid Flight” posted by the Twitter account @HoaxEye, the role of the irate Karen was played by Diana Winter, an English actor from Bournemouth, United Kingdom who is registered with UK Equity and has appeared in a smattering of short films. The role of the flight attendant appears to have been played by an actor named Jordan Holland, who is represented by the agency Aston Management and wrote a now-deleted post on her Facebook about her experience working on the film. “Great fun filming today with a fun crew! Got to play the part of an airline hostess dealing with a not-so-happy Karen,” she wrote in the caption of the post, which featured a photo of the cast and crew, including Winter, on the airplane seen in the viral video. (Holland and Aston Management did not immediately respond to requests for comment, nor did Williams.)

The director credited on IMDB as helming the video, Jamie Hull-Greenwood, also posted photos from the set on Instagram, including a selfie also dated Oct. 27 of the airplane interior that shows Holland in her flight attendant costume in the frame. “Filming on a plane for Prince Ea, directing a micro short is normally fun but with a fear of flying it’s pretty scary,” he wrote in the caption of a selfie showing him in the cockpit, followed by the “joy” emoji.

It’s not exactly unheard of for a production company to stage vignettes on social media in the hopes of going viral, usually using professional actors. The startup digital marketing agency FourFront, for instance, revealed last month that it had been casting actors to play real-life influencers on TikTok, allowing viewers to follow fake narratives (such as a woman finding out her boyfriend is an African prince) without disclosing that they are scripted, racking up hundreds of millions of views in the process.

But the breadth and reach of this particular video — which, with its wooden acting, predictable narrative, and obscure details such as the lack of an identifiable pilot uniform, clearly appears to have been staged — is surprising to even those who study misinformation on the internet. Those who shared the video without questioning its origins “aren’t stopping to process what they see,” says Darren Linvill, an associate professor studying social media disinformation at Clemson University. “They are seeing something they agree with, something similar to other viral social media content they have experienced, possibly even something that makes them feel good, and they are propagating the message without thinking about it,” he says. “People don’t tend to question things that conform to their own preconceived ideas, and this video is illustrating that fact perfectly.”

Actor from The Outsiders Rejected The Karate Kid